Progress Surf Club is primarily a Kids Surf Club & Academy, for children age 8-18, that runs out of Caswell Bay. With a 3 stage development programme the club caters for all levels, from the complete beginner to surfing, right through to national and international competitors. The club is currently developing links with Ethnic Youth Support Team to encourage the participation of surfing with ethnic minorities and has been working with 'Surf Therapy' to provide surfing lessons as therapy for sufferers of PTSD. 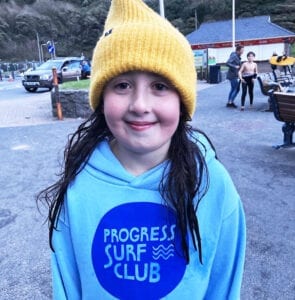 Whils't the emphasis is on fun, our development focus is on learning the basic surf skills of paddling, catching waves popping up and riding to shore whilst also encouraging greater water confidence. On top of the surfing elements, mobilisation techniques, cardio and strength work are introduced within play based activities.

"Our daughter has tried many clubs over the past few years with not much success. It's taken a lot to get her to even try things out and she was the same about the first session with Progress at the beginning of the summer. She was literally crying the day before wanting to go but on the flipside feeling really anxious about trying something new, even though one of her friends from school would be there. After the first session the delight on her face was amazing and a few weeks in she was literally buzzing after coming out of the water! For her to run off down the beach without me by her side is huge for her. I honestly feel that the weekly surf lessons she's been attending have boosted her confidence massively"....Carys

Ally's Catz is our intermediate level coaching program for 'Kids Club' graduates. Headed up by English Junior champ Alys Barton, the program aims to take young surfers from the starting point of being able to catch and ride unbroken waves to riding across clean waves whilst performing turns. Emphasis will also be placed on the development of a higher standard of surf specific fitness, through mobility, cardio and strength drills.

"My daughter absolutely loves attending the Progress Surf Club every week, she is constantly developing and gaining more and more confidence in the water. The club is great for both her physical and mental well-being, the instructors make the lessons fun and provide a lot of support to the learners. As a parent it’s good to know that there’s a club that can offer children this opportunity locally, along with fact that they are safe and supervised in the water"....Kate

Pats Ratz is our junior coaching, developing and training programme, headed up by, ( 2 times UK Pro Tour champion ), Patrick Langdon-Dark. Designed to develop the next wave of surfing talent from intermediates to elite athletes competing on the world stage.

Surf sessions are predominately filmed for analysis of technique on all aspects of surfing allowing for immediate feedback to be given before, during and after surfing from the waters edge. Emphasis will also be placed on the development of an advanced standard of surf specific fitness, through advanced mobility, cardio endurance, strength drills and diet.

Location of sessions depends on surf conditions and are mobile.

"My son Jed has been part of Patz Ratz for some time.  The skills he has developed in that time have helped him grow to a standard where he has surfed for Wales at a national level in both Portugal and the Channel Islands, and is currently the under 14 and under 18yrs Welsh champion.

The sessions he had with Patz Ratz have helped enormously, having this training and support on our doorstep has helped Jed achieve his goal of winning his age categories in the Welsh Open surf competition.  Despite an incredible coastline and many talented young surfers in Swansea and Gower there was little in the way of support or training for them prior to Patz Ratz starting.  Being able to have training on local beaches has meant Jed has had more time in the water with top quality coaching, and less time having to travel to Cornwall.  With surfing rising in popularity and now a part of the Olympics this is a great opportunity to foster young local talent in our area.  Through his Patz Ratz sessions he has grown in confidence and resilience, his surfing skills have improved giving him opportunities to travel, compete and meet surfing heroes, he now looking at surf coaching as a future job"...Sam

Formed in 2019 'Surf Therapy' became part of the Progress Surf Club program in 2020. Our mission is to provide ‘surf therapy’ for men suffering with depression, anxiety, stress and other mental health issues.

'The chaos and energy in the ocean calms the chaos in my mind'
'I didn't think that people like me deserved to surf; I thought it was just for normal people.'
'There is so much positve energy around the beach and surfers, not like the dark world I live in.'  - Surf Therapy members.